You spoke and we listened. The most notable take aways from the night are: 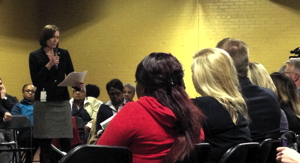 Why were more children lead poisoned in 2015 in Grand Rapids?

The Kent County Health Department and the Healthy Homes Coalition made contact with the Michigan Department of Health and Human Services (DHHS) on Monday, March 14 to begin seeking answers to this question. DHHS will initially look for abnormalities by geography, testing providers, and laboratories. We expect some preliminary answers to these questions next week. If an explanation is not found in that data, the Healthy Homes Coalition has requested that DHHS also explore trends by race, ethnicity, and time of year the child was tested. The group is also interested in exploring connections to renovation and rental certification activity.

Many of those who attended the Town Hall meeting signed up to help with various activities. Here's an update.

Some groups have begun neighborhood canvassing in areas where the City is replacing water service lines. An initial canvas scheduled for March 26 has been postponed until April 23 due to conflicts with the holiday weekend for many volunteers. If you would like to help out with neighborhood convassing to alert families to the hazards of lead on April 23 or at any other time, contact Courtney Myers-Keaton at courtney@healthyhomescoalition.org.

Our first Peer Educator has been trained and will begin visiting families this week. Now that training is in place, we will be contacting those of you who signed up to help in this way in April. If you didn't sign up, but would like to help, contact Courtney Myers-Keaton at courtney@healthyhomescoalition.org. 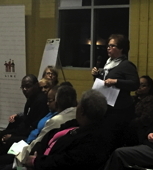 Watch for future opportunities to engage elected officials. The Healthy Homes Coalition is currently working with City, County and State leaders on various initiatives to address childhood lead poisoning in Grand Rapids. We will let you know how you can help support those plans as they develop. Current progress includes:

Watch for future opportunities to engage elected officials. The Healthy Homes Coalition is currently working with City, County and State leaders on various initiatives to address childhood lead poisoning in Grand Rapids. We will let you know how you can help support those plans as they develop. Current progress includes:

As opportunities for action arise, we will let all who received this email know how they can respond.

The Jericho March will be held once warmer weather is assured and when new initiatives for addressing lead hazards need support. To help with this effort, contact Rev. David May at davidmay1941@gmail.com. An organizing meeting will be held in the coming weeks. Stay tuned!

New Resource About Lead In Water

The Healthy Homes Coalition has a new webpage that looks at the issue of lead in Grand Rapids' water and provides resources and guidance for decision-making. Visit www.healthyhomescoalition.org/lead-in-water.

The organizers want to thank all who came, especially the four brave parents who told their stories. Hearing first-hand and taking to heart the perspective of those impacted by lead in their communities and families is an essential part of solving this problem. Thank you for speaking out!

We's also like to thank the following elected officals or their staff for attending: 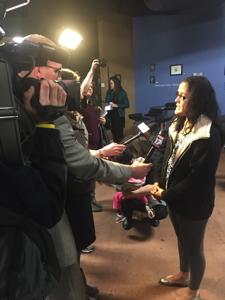 Links to Media Coverage of the Event

Lead poisoning cases on the rise in Grand Rapids (FOX-17)

More kids in Grand Rapids are being poisoned by lead (MLive)